As you all know, Covid-19 has had a major impact on all our lives. With that in mind, we have made the decision to postpone TTFF3 until Spring of 2021. As an “in person” event, the safety of our patrons is paramount, and with the way things are, we just aren’t confident that things will be “back to normal” enough by September to take the risk. So — we’ve moved it back a bit. The new date is Tuesday, May 4th, 2021. The venue has NOT changed — we will still be showcasing these great films at the legendary Texas Theatre. So mark your calendars! And thanks for your understanding. 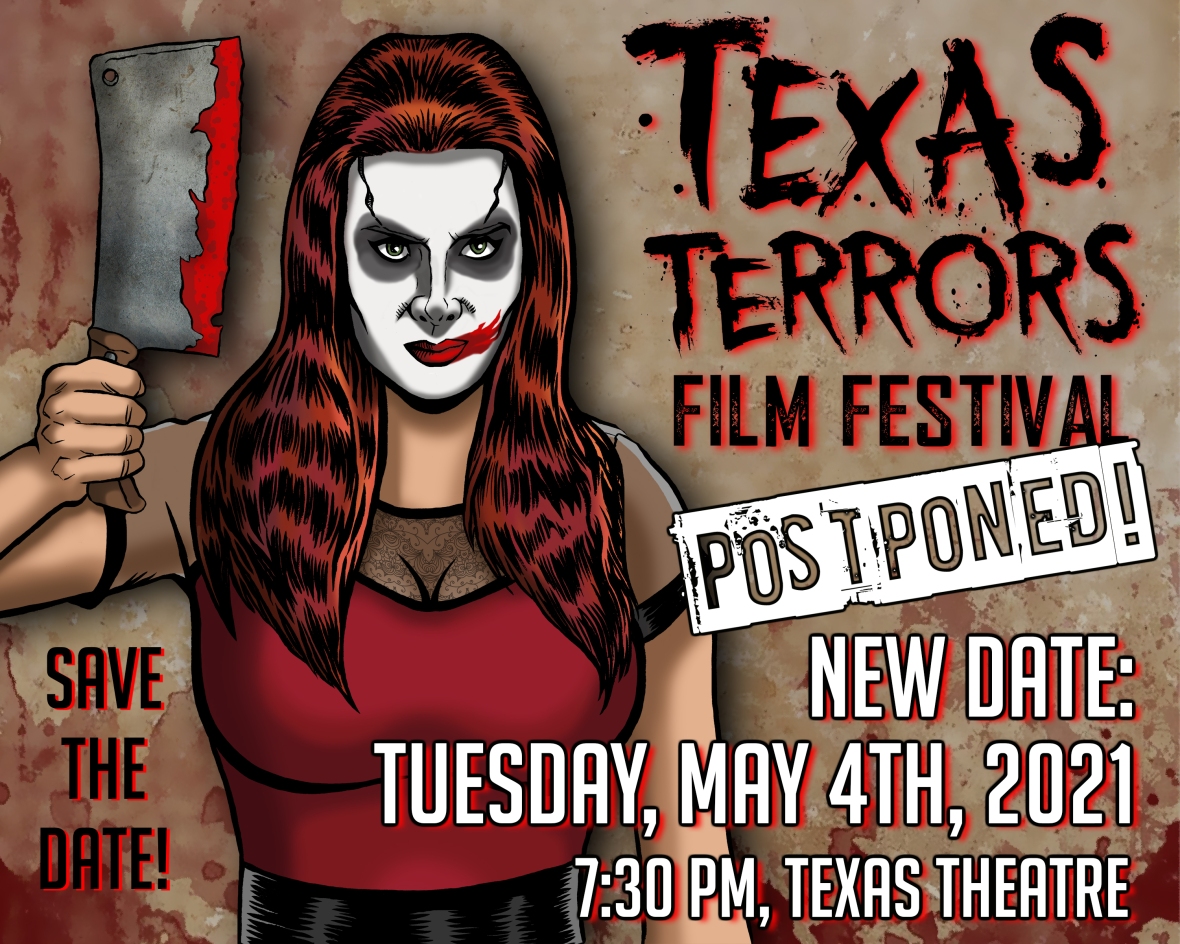 NOW OPEN FOR SUBMISSIONS! CLICK THE FILMFREEWAY BUTTON BELOW TO HAVE YOUR SHORT FILM CONSIDERED FOR TTFF3!

I have created a new web store for my own artwork, AND for Texas Terrors swag. We have t-shirts, hats, and posters! Just click on the link, and select “TTFF” at the top of the web page to see the related items. Also, feel free to peruse the cool horror-rific prints in my new “Never Comics” series.  NEVER COMICS

Year two of TTFF is in the books! Thanks to everyone who attended, and to my awesome staff and volunteers! It was a great night, with great reactions from the crowd! See you all in Year Three!

Here are the Weeper Award winners for 2019:

Congrats to all our winners!

HERE IS THE AMAZING LINEUP FOR THE 2019 FESTIVAL!

LILY – With her parents out for a few hours, young Lily gets a new babysitter. Said sitter, however, may be in for more of a challenge than she anticipated. (9:00) World Premiere

STILL – Photojournalist Vanessa takes it upon herself to investigate a local disturbance. She quickly finds that there are some things only her camera can see. (6:25) Texas Premiere

SYMPHONY – Abducted in broad daylight, Sadie awakes to find herself in a dreary basement, confronted with two individuals who may have murder on their mind. (12:00) World Premiere

PROOF OF PURCHASE – A bored, redneck vampire hunter must go through the drudgery of his job one more time. (7:20) World Premiere

SELF SABOTAGE – A girl, recovering from a failed suicide attempt, struggles with the guilt of feeling like she is destroying everything and everyone she loves. (10:00) National Premiere

NEPENTHES – Max is desperate to make a meaningful connection, but when she decides to meet an online dating match at home she gets herself into a painfully sticky situation. (5:18) Texas Premiere

SAVE YOURSELF – Peter is a housekeeper who suffers from a crippling fear of cats. When a pig-lizard monster emerges threatening the safety of his town, Peter enlists the help of his closest friends to face his fears and stop the Pizard. (15:00) World Premiere

BAD LAMP – Three people’s lives are suddenly changed at the hands of a strange desk lamp. (16:00)

TO WHOEVER FINDS THIS – A forger is hired by a reclusive stranger who offers his life’s fortune if he can write him a suicide letter by midnight. (10:00)

THE INGRESS TAPES – What are The Ingress Tapes? The ramblings of a violent fantasist? Or the taped confession of a multiple murderer who was never caught? Documentary or fiction? The truth is elusive. (8:00)

NOM – An old cyclist sets off into the hills, on a last journey with an uncertain end. (10:30) Texas Premiere

ONCE BITTEN… – Martha needs the toilet fixed in her hotel bathroom but there’s one problem: her plumber may be a vampire. (10:00) Texas Premiere

CLOSER – Stumbling across ASMR videos late one night, Sarah accidentally ventures down this online rabbit hole. Plagued by eerie whispers and apparitions, she is unsure if everything is in her head or real. (4:30) Texas Premiere

THE DARLINGS – As the full moon rises, a punk band known as The Darlings return to their rented mansion after the last leg of their tour. When the radio informs them of an escaped killer on the loose, they are shocked to find him already in the mansion. (15:00)

NEW FOR YEAR 2: CASH PRIZES!! The second annual WEEPER AWARDS, celebrating excellence in filmmaking, will now feature cash prizes in every category, including $100.00 US for Best in Show!

Texas Terrors is an indie/grass roots short film festival celebrating the fun in bone-chilling horror. We’re less concerned with Hollywood-style slickness than with creativity, originality, and passion. The festival will feature a diverse array of scary stuff, and provide a fun evening of chills and thrills. 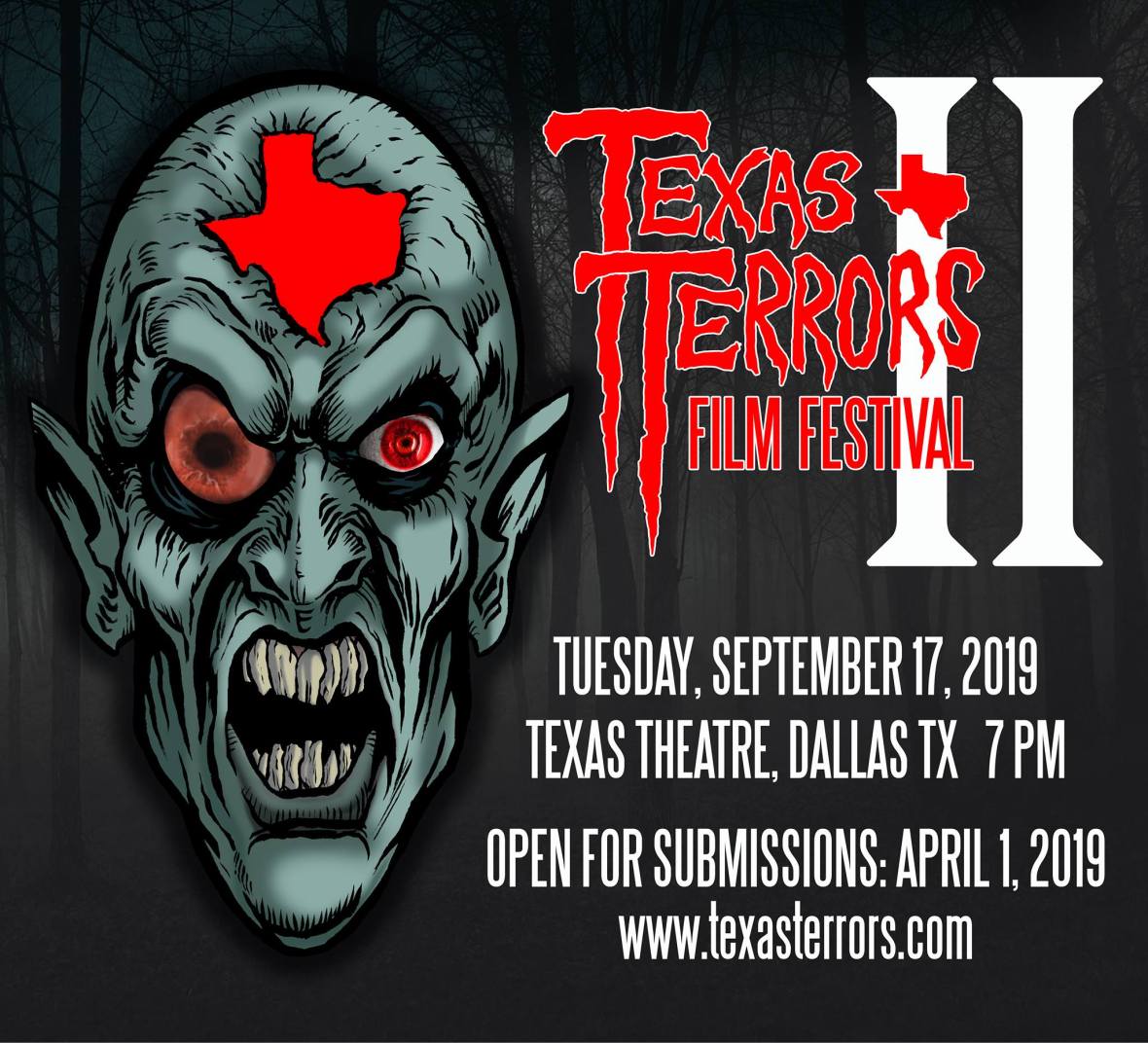 Well, the first Texas Terrors Film Festival is in the books. THANKS to everyone who attended, who submitted their films, and who helped in any way! Looking forward to next year!! 🙂

GET YOUR TICKETS HERE!

The inaugural Texas Terrors Film Festival will take place on Tuesday, September 18, 2018, at the historic Texas Theatre in Dallas, Texas.

Texas Terrors is an indie/grass roots short film festival celebrating the fun in bone-chilling horror. We’re less concerned with Hollywood-style slickness than with creativity, originality, and passion. The festival will feature a diverse array of scary stuff, and provide a fun evening of chills and thrills.

SUBMISSIONS ARE CLOSED AND THE SCHEDULE HAS BEEN ANNOUNCED!